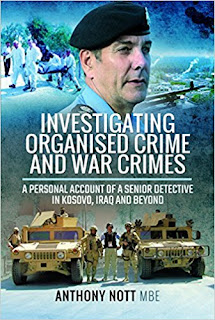 Tony Nott was a senior officer with Dorset Police when he decided take a stint in Kosovo heading up the British Forensic Team. This was just after NATO’s successful intervention in the province that put an end to Serb atrocities there. Tony got the job and the second chapter in this book (the first introduces us to the author and his work in the Dorset Police) details his experiences in Kosovo. The chapter gives some insight into the harrowing nature of his work but is a little too brief for my liking.

After returning briefly to England, Tony then took a job in Bosnia with the United Nations International Police Task Force (IPTF). The author dedicates a good four or  five chapters to his experience in Bosnia and this is a much more interesting section of the book. There is the case of Fr. Tomislav Matanovic,  taken from his house by Republica Srbska police (Republica Srbska being the ethnically cleansed enclave carved out of Bosnia by Serb nationalists), executed and dumped in well. Despite Tony’s team amassing a wealth of evidence the perpetrators have yet to be brought to justice. The IPTF also came across human trafficking and the trafficking of women into sexual servitude. This brought him into contact with Milorad Milokovic and the organised crime ring he ran. The Milakovic Mafia, as the IPTF investigators dubbed them, trafficked women into prostitution and bought off or intimidated any local officials who crossed them. Tony and his team had more success here, bringing the family to justice.

After Bosnia, Tony then took a posting in Iraq. Unlike Kosovo and Bosnia where he arrived in the aftermath of war and his role was one of helping a country return to normality, Iraq was in the middle of a burgeoning civil war. This was a much more dangerous posting, yet again his job was to try to help create a functioning local police. This section of the book is the most compelling, even better than the section on Bosnia. Not least this is due to his account of the investigation into the death of Margaret Hassan, a British woman living in Iraq and working as an aid worker, who was abducted and callously executed. Tony takes us through this investigation and we learn of who was behind the kidnap, a Sheikh Hassan. Despite his best efforts the Sheikh was to evade justice.

The final chapter of the book details Tony’s last deployment, to Palestine to help train local police there. This is an uneventful chapter and really seems to have been tacked on. Either not much happened of note during this deployment or the author is keeping his counsel. Either way, this in minutia highlights a problem with the book. While on the whole I thought this a good and illuminating book, it suffers from problems of brevity and a certain stilted and dry tone. An example, in the section on Bosnia we learn of a group of apparent nuclear smugglers offering to sell Red Mercury to the highest bidder. A contingent of French soldiers goes charging off to round the smugglers up only to find it’s a con - Red Mercury being a notorious urban myth, there simply is no such substance. This is a great story, but is covered in just a few pages. Why? Is the fault with the publisher - Pen and Sword seem to like to keep their titles around the 200 page mark - or the author? Perhaps by the nature of his job, Tony simply is not allowed to tell us more than he has. Either way, this book would have been better if it had been allowed to breathe, the stories and anecdotes expanded.

That all said, Investigating Organised Crime and War Crimes is a great book and certainly worth a read. The Iraq section on it’s own elevates it above similar tomes .