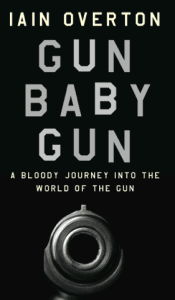 Gun Baby Gun is an outstanding achievement. In a world of drones, stealth bombers and intercontinental ballistic missiles, the author Iain Overton is perhaps the first journalist to trace the path of the humble gun, from factory to soldier, police officer to criminal. This is narrative history, a geographical journey that takes the reader from the shantytowns of South Africa to the well-heeled streets of investment fund New York.

I have to confess that as an aspiring crime novelist I approached this book with not a little vicarious fascination. Would I find some juicy titbit with which to pepper my novels? Would I glean some surprising factoid with which I might titillate my readers? But I found this to be no homage to the firearm, no hagiography; instead I found something much more interesting.

Gun Baby Gun is a sober but increasingly angry book. The author documents what guns do, the damage they wreak. The author rails against a culture that glorifies them. There’s a good section where he describes how guns transform a person, elevate the mere bully into the thug that cannot be ignored. He describes how even police officers and soldiers walk differently when they have a gun. He discusses masculinity, makes a throw away remark that perhaps only women should be allowed to own guns. Having read this book I wonder if that’s not such a bad idea.

But it’s the author’s use of statistics that are most compelling. Who knew that there are more gun shops in the US than petrol stations? Or that numbering almost 130'000, their number even surpasses that of McDonalds outlets? Or that the largest gun dealer of them all is Walmart? Statistics like these pepper the book and are used to great effect to highlight our culture’s absurd relationship with firearms. While this culture is most prevalent in the US, it can be seen in every gangster flick, action movie, or video game.

And that brings this review back to me. For I found myself increasingly uneasy reading this book. I read and write crime fiction. I play Call of Duty and Grand Theft Auto on the PlayStation. I love a good action flick at the cinema. Will I continue to do all that? Yes. It’s almost certainly a cop out and I’m sure I wouldn’t be so glib if I ever witnessed gun violence myself, but I enjoy such entertainment and it’s never made me violent. (Please note, the author doesn’t claim that everyone who plays a video game or watches an action flick will turn into a gun-toting psychopath, but quite rightly, he does raise the issue of violence in entertainment and aggression in the real world).

But will I be more circumspect in future? Will I try to ensure that I don’t inadvertently glamorise the gun? After reading this, I’ll certainly try.

Five well deserved Stars
Posted by TheReader at 03:18 No comments: 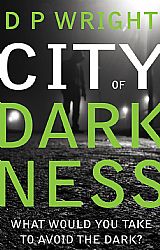 I shouldn’t have borrowed this book. It’s not really my cup of tea. To be honest, I had my doubts when reading the blurb – a private eye story in a dystopian science fiction universe. I’m into crime fiction, but don’t really “do” sci-fi. But I thought I would give it ago, as the story appeared compelling.

Detective Sebastian Kessler lives in Dis, a sprawling urban nightmare run by corporations and choking on foul, polluted air. He takes synthetic drugs, is addicted to them. One day a case comes his way, a waif of a woman walks into his tip of an office begging for help. She’s the daughter of a priest who appears to have been brutally murdered. Or perhaps he overdosed on a new lethal drug doing the rounds. So far so very Chandleresque and there is much in this tale that is inspired by the PI novels of old.

So I borrowed this book hoping that the detective bit would outweigh the sci-fi bit. I like dystopian fiction, but I like mine more like Cormac McCarthy’s The Road. I had real trepidation about the sci-fi. Unfortunately for me, my worries proved founded. The book is very sci-fi and I struggled with that. I found it difficult to imagine the world of Dis that the author set out, to picture it in my mind. This got in the way of the reading experience for me and I never felt compelled to pick up the book, never found it a page-turner. Until the end when to my surprise a supernatural element was introduced.

But having said all that, I accept that much of my problems with the book came from my own mind. Perhaps I lack the imagination of those who read sci-fi? Perhaps my desire to read tales grounded in a more recognisable world is a fault of my own? And City of Darkness is a well-written tale. So I’m going to give this book 4 out of 5 stars, because while I might not have enjoyed it myself, I’m sure those more interested in sci-fi will.

I would give this book 4 out of 5 stars
Posted by TheReader at 05:29 No comments:

The Samaritan by Mason Cross 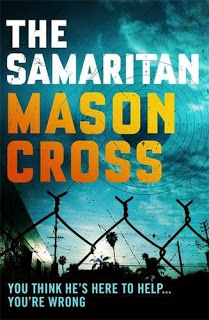 The Samaritan is the author’s second novel, his first, The Killing Season, being a runaway success. I haven't read the first book and as the sequel features the same main character, Carter Blake, I was a little apprehensive as to whether I would find it hard to pick up any relevant backstory. I needn't have worried, The Samaritan works as a standalone novel, though obviously it would be better to have read the first book. The author gives enough snippets of information for a new reader like me to understand the character and what he’s experienced in the past, without rehashing lots detail that might slow the plot.

Carter Blake is an interesting creation, a former special forces soldier who now searches for people who don’t want to be found. Early on in the novel you learn that he has a sense of ethics, refusing a job that might lead to the person he locates being killed. While the author doesn't go into too much detail about the special forces unit he was a part of (all we really learn is that it is completely off the books) it struck me that the author was inspired by the Intelligence Support Activity, a real life Pentagon unit that is shrouded in secrecy.

The story kicks off when one of his former colleagues, also a veteran of the above mentioned unit, and a man who always enjoyed killing just a little too much, begins murdering women in Los Angeles. His method is to abduct women whose cars have broken down on the freeway, torture and kill them. Carter Blake sees a news broadcast about the unsolved murders, recognises a feature of the case, and travels to Los Angeles to assist. The local police are of course suspicious of this outsider, but eventually one detective in particular embraces him.

As I mention above, the author’s first novel was a success and received overwhelmingly positive reviews; I imagine this second outing will receive the same. All of which means that I am likely to be the exception rather than the rule. It's not that I didn't enjoy this novel, I did, it kept me turning pages and coming back for more. But a thriller of this sort needs more if it's going to elevate itself above a mere airport novel, something to be quickly read and quickly forgotten. For me this doesn't reach those heady heights.

First off, the antagonist just doesn't ring true. Special forces and intelligence services psychologically screen their candidates and I'm just not convinced that someone as psychotic as the author portrays him to be would pass muster. Then there’s the whole serial killer thing. Personally I find deranged murderers slaughtering a succession of young women kind of tedious and with the odd exception – Silence of the Lambs, the movie Seven – I prefer my crime fiction to rely on something more. This was just another serial killing book, the victims reduced to carcasses, albeit with an interesting protagonist. And that brings me to Carter Blake himself. I like the people-finder specialist; it's an interesting role for a character. Unfortunately, however, the excellent author Tim Weaver has already done this much better, albeit with his character set in the UK and an ex-journalist rather than a spec ops guy. In comparison to Weaver’s David Raker, I just found Carter Blake a little one-dimensional.

In conclusion, this is a fast-paced roller coaster of a ride, lots of thrills and spills, lots action. It's a good book to read on the beach, by the pool, or to make that flight go a little faster. But will I be searching out Mason Cross’s previous books or any future outings for Carter Blake? Yeah, sure, it was fun. But there are other authors whose books I’ll be reading first.

I would give this book 3 out of 5 stars
Posted by TheReader at 03:45 No comments:

The Spider in the Corner of the Room by Nikki Owen 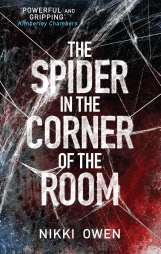 The Spider in the Corner of the Room is an odd book. The basic plot is a Spanish female doctor, a plastic surgeon specialising in burns and reconstructive surgery and who suffers from Asperger’s Syndrome, wakes up in prison having been convicted of a murder she doesn’t recollect. So far so simple. But this is no linear novel and as with the Christopher Nolan movie Memento, events and the character’s unreliable recollections are fed to us in snatches. Just as with the Guy Pearce character in that great movie, we accompany our protagonist, Dr Maria Martinez, on her journey to reclaim her memories and thus discover the truth. Did she commit the terrible murder, and if so, why? Has she been framed? Who are the mysterious people in her past – the priest, the university lecturer – who appear to have honed her skills at problem solving? What did her beloved father know, and was he murdered because of this knowledge?

It’s a good premise and the author, Nikki Owen, pulls it all off with some panache. The trouble with such a novel that leaps from narrative place to place, timeframe to timeframe, is that the reader risks becoming confused and worn down by trying to keep up with it all. Throw in a conspiracy involving MI5 and a rogue Security Service sub-section and these risks are multiplied. I’m pleased to say that on the whole the author avoids these pitfalls and I remained gripped throughout. Dr Martinez’s Asperger’s is deftly handled as is her feelings of alienation as a foreigner in a British jail. There were a few times when I felt that the plot stretched credulity a little, especially when the author starts to explain the whole conspiracy aspect. But on the whole I thought this a thoroughly good read and such quibbles did little to spoil it for me.

The ending of The Spider in the Corner of the Room was left open, apparently this being the first in a trilogy. My only concern with this is whether Nikki Owen will be able to extend the conspiracy aspect of the story over the three books and whether the credulity straining I mentioned earlier will reach breaking point. That said I’m glad I got in on the beginning of the journey look forward to the rest of the ride.