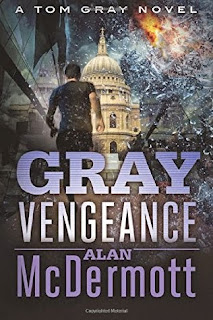 Two words came to mind while reading this novel. The first was ‘bravura’, the second ‘chutzpah’. Why these particular words? We’ll come back to that, but the first thing to note about Gray Vengeance is that it is an unapologetically ambitious novel. It takes in a nationwide terror campaign, various rogue spooks and SAS people, political corruption, the NSA blanket surveillance controversy, tensions between the various intelligence services – both allied and domestic – and, and, and…You get the picture.

Now let’s step back a bit. A long time ago I bought the first three of Alan McDermott’s Tom Gray novels; if memory serves me right, they having been reduced in one of Amazon’s intermittent kindle book sales. I never got round to reading them, although I kept meaning to: they’re the kind of books I like to read and the cover art is exceptional. Fast forward to now and I’m reviewing books for this blog and what should pop up on Netgalley? You guessed it, the next Tom Gray novel. Gray Vengeance is number five in the series and I have numbers 1-3 –which as I say I haven’t read – so what to do? After a bit of indecision, I thought ‘What the hell?’ and requested book 5.

Now the danger with having so many plates spinning in the air of one’s plot at any one time is that one or all might come smashing to the ground. Or they might become entangled and make a mess (can plates become entangled? Probably not, but you get where I’m coming from). Or you just lose track of which plate is which or what the hell it all amounts to. And this is where those two words at the start of the first paragraph come in, because the author doesn’t allow any of that to happen. It takes a certain ballsy-ness to write a big over-arching conspiracy thriller like this, one has to just go for it without hesitation. If the reader feels just a tremor of doubt then the whole thing falls apart. I’ve never met the author, Alan McDermott, but I can say one thing with assurance: he’s got b***. If he had any doubts in his story when writing it, it doesn’t show. Instead it just belts along at a frenetic pace, taking the reader with it.

Now sure, I have a couple of little niggles. It would be a surprise in a book with so many strands to its plot if I didn’t. For a start, near the very beginning the terrorists recruit a bunch of anarchists to fly to Nigeria for training so that they can participate in a nationwide bombing plot. Other than knowing that the group that they’re a part of is very radical in what it espouses, the terrorists don’t really do any vetting of these guys. In fact when they make their initial approach it’s revealed that until now all the anarchists have done is a bit of graffiti and criminal damage. Would a sophisticated terror organisation really risk everything on a punt like this? Perhaps more seriously, when the bombing campaign begins the power grid is seriously disrupted. But it’s also explained that the terrorists don’t really want to bring down the internet or the phone network because they want to communicate with their cells. Fair enough. But the author seems to want his cake and eat it: on the one hand he wants the power to much of the country out so that rioting and disruption can occur, but on the other hand he wants his heroes to be able to use the NSA super system, hacking, all the other 21st century spy geekery that a modern spy thriller enjoys. But hang on a minute; wouldn’t the power going down, even if in just parts of the country, affect the internet and the telecommunications system? In an interlinked world, servers going down in one place can seriously affect the whole system. This circle is never satisfactorily closed.

There are a couple of other issues I have which I can’t really describe for fear of giving away a spoiler, though as with the above two mentioned, they’re minor niggles which in no way spoiled my enjoyment of an otherwise excellent book. I have to say that I’m now itching to read the previous three that I have sitting on my Kindle, oh and I’ll have to buy number four, and then he’ll bring out a number six…

In conclusion I want to give this book four out of five stars, there are some flaws in the plot – however minor – as outline above. But the sheer panache with which it was written bumps it up to five-star read, so there you go.

I would give this book 5 out of 5 stars
Posted by TheReader at 07:04 No comments:

The Shape of Shit to Come 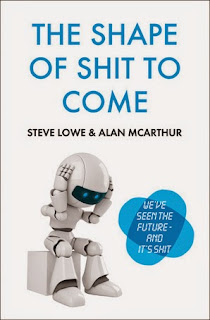 I picked this up as I have a great interest in the near future, in how technology will take us in the next two hundred years or so. I’ve been greatly impressed with the work of authors like Michio Kaku, whose works Physics of the Future and Physics of the Impossible, look at just this from a serious scientific point of view (Mr Kaku being an astrophysicist).

The Shape of Shit to Come promised to deliver just such a read, albeit in a more satirical and comedic sense. In many ways it did just that.  Covering topics such as genetics, robotics, and space travel to name just a few, and doing so in an amusing and easy to understand manner, I definitely felt that I came away from the read enriched and educated. Sometimes I did feel that the authors tried a little too hard to be funny however and occasionally I felt that the sarcasm and humour got in the way of a real understanding of the issue at hand. Whereas their irreverence ensured that they avoided the pitfalls Micio Kaku occasionally falls into – e.g. a wide-eyed, innocence where the technology is concerned that leads him to conclude that the outcome will be some kind of perfect nirvana – on occasion it leads them to the other extreme.

One the whole though, while I prefer Michio Kaku’s work I have to say that The Shape of Shit to Come is a valuable addition to the cannon of furturism work and I would highly recommend it. 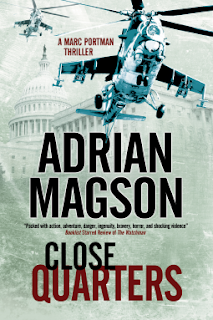 This is only the second Adrian Magson novel I’ve read. Along time ago I read his novel Red Station, the first of his Harry Tate series, but wasn’t massively impressed. It wasn’t that it was a bad novel, just a little slow for a spy thriller. Recently NetGalley hosted Close Quarters, the second in his Marc Portman series, and I opted to give it ago. I have to say that I’m glad that I did.

Close Quarters is incredibly current, set in the on-going conflict between Russian separatists and the Ukrainian Government. The story revolves around Marc Portman, an ex-special forces contractor who specialises in protecting people from afar, being brought in by the CIA to rescue a State Department diplomat who’s under ‘house arrest’ in a hotel in eastern Ukraine. Needles to say, if it were that easy this would be a very short novel indeed. Instead, for reasons I won’t share for risk of divulging spoilers, the plan goes seriously awry.

I do have a couple of issues but they all centre on the same thing. Throughout the book our hero runs into Spetsnaz troops, basically Russia’s equivalent to the SAS. Yet he never seems to have any trouble dispatching them. In one scene, after the armoured truck the Spetsnaz are in crashes into a lake, he drags two of them out and ties them together by their thumbs. And that’s it, job done! I’m sorry; these are either elite special forces or they aren’t. Similarly, after subduing a female sniper (again hardened ex-army) she sits meekly by while he shoots her colleague in a gunfight. She doesn’t try to escape or overpower him when his back is turned or anything.

But these are minor issues in an otherwise good, solid, and gripping thriller. Close Quarters is an action packed thrill of a ride. It’s fast paced and kept me swiping along (I read it on Kindle) at a merry old rate. It would be true to say that I found it hard to put down and read it in two days. The Ukraine is nicely brought to life as a location and the author has clearly researched some tradecraft, referring to agent running, etc. I liked the topicality of the plot, I liked Marc Portman as a character, and I would definitely read more of this series.

Posted by TheReader at 14:00 No comments: