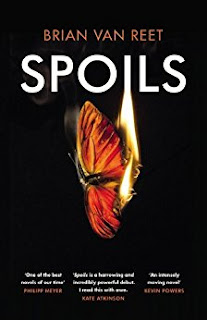 This is a great novel written by a former US Army tank crewman. There are three main characters, Sleed a tank crewman (like the author himself), a female soldier Specialist Cassandra Wigheard, and a jihadi named Abu al-Hool. Cassandra is escaping a life of poverty, stoically endures the macho sexism that characterises army life - the patronising chivalry of her immediate superior, the brutish misogyny of a fellow crewmate. She’s better than many of her colleagues but must work twice as hard to prove it. Sleed is a typical grunt trying to get by. Surrounded by thuggish colleagues he tries to fit in, but there’s a decency about him that his immediate comrades lack. Abu al-Hool is a veteran jihadi whose exploits date back to the Afghan jihad against the Soviets. He’s increasingly disillusioned by his life and has recently been usurped as leader of his band of fighters.

Dr Walid, the new leader of al-Hool’s jihadi band, has brought them to Iraq. For weeks, they sit around doing nothing but shooting propaganda videos, Walid clearly seeing himself as a proto-Zaqawi. But then they get wind of an American position and attack. In the ensuing firefight, Cassandra Wigheard and two other Americans are captured. The Quick Reaction Force that would, potentially, have rescued them is delayed, thanks to Sleed and his colleagues being away from their posts: they were searching one of Saddam’s palaces for booty.

The rest of the novel is focused on Wigheard’s captivity and, to a lesser extent, the American forces’ hunt for her. Wigheard really is a great creation, a character the author brings to life with a deftness of touch. The jihadis are also brilliantly portrayed. While some are the brutal psychopaths we might expect from the news media, most are portrayed as ordinary human beings, whose motivations for taking up arms against what they perceive to be foreign invaders in Muslim lands are numerous and complex. One striking aspect of the novel is how the author portrays their reaction to having captured a female soldier. As products of conservative Islam, they are equal parts fascinated and repelled by this blonde-haired example of the opposite sex. When she has her period their behaviour would border on the comical if it weren’t for the circumstances.

If I have one minor criticism of Spoils it’s that I’m not sure that the character of Sleed adds much to the narrative. It’s not that he’s a poorly constructed character, he isn’t, his characterisation is equally strong. But one could imagine the novel with his sections edited out and the book wouldn’t necessarily be any the weaker for it. Perhaps the author should have told the story just from Wigheard and the jihadists point of view and saved Sleed for another book.

Certainly, I hope this isn’t the last we hear from Brian Van Reet, he’s an author I would like to read more from. If Spoils is anything to go by, he’s a special talent. 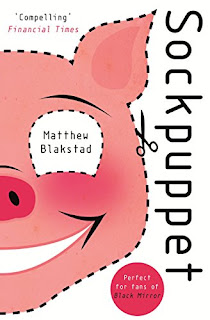 This is best characterised as a political/techno thriller, though it could also arguably be filed away as a warning for our times. The plot revolves around a fictional social media platform, Parley (think Twitter as the descriptions of Parley are very similar to Twitter) which at its heart has a number of bot accounts. Users interact with each other and these bots, they compete for the attention of the bots. One such bot account is sic-girl, the creation of one of Parley’s key programmers, Dani Farr. Meanwhile, government minister Bethany Lehrer is unveiling a flagship programme, the Digital Citizen initiative. In return for allowing a private corporation access to all their private data - medical records, etc - people will be able to access services much faster and more efficiently.

The trouble starts when those people taking part in the Digital Citizen trial have their computers locked down, little piggy emoji’s plaguing their screens. Then sic-girl starts leaking damaging information about Bethany Lehrer and hinting that the entire Digital Citizen database has been hacked - all that private material in the hands of hackers. The police get involved, naturally assuming that Dani Farr is sic-girl, that she’s behind the leaks and the hacks. But she insists that she’s not, that sic-girl is just a stupid bot.

What’s going on? Is Dani a hacker? Has sic-girl graduated from bot to fully conscious artificial intelligence? Or has someone else subverted the bot? Is Digital Citizen an Orwellian nightmare as some suggest, or just a means of making all our lives easier in the interconnected, 21st Century? Things are complicated by a cast of supporting characters. The chilling head of the tech company set to run Digital Citizen; the charming PR guy Dani has always had a thing for; her fellow coders in Parley, all not quite as talented as her but anyone off which could have pulled off the hack.

Sockpuppet keeps us guessing until the end and certainly makes one think about the consequences the technological revolution holds in stall for us. With the internet of things just around the corner and the age of big data still in it’s infancy, the author touches on something that is all too current. But if anything, I found Sockpuppet a little too tame. A few years ago, I read a frightening non-fiction book, Future Crimes by Marc Goodman. A former adviser to the FBI, Goodman looked at the trends in cybercrime and cyberwar and predicted how the bad actors would make their living in the brave new world we are living in. It made for terrifying reading and the world of Sockpuppet is benign in comparison. Perhaps because of this, I found Matthew Blakstad’s novel dragged a bit. I felt he could have shaved a hundred pages or so and still told the same story.

All considered, Sockpuppet is a great debut and certainly I will read more from this author. In fact, I purchased his eBook prequel novella as soon as I had finished Sockpuppet. From what I understand he is hard at work on a sequel. If I had one suggestion to make for the continuation of the series, it’s for him to take more risk: delve into the darker aspects of cybercrime and cyberwarfare and pull out the real horrors that lie within.

Posted by TheReader at 09:24 No comments: 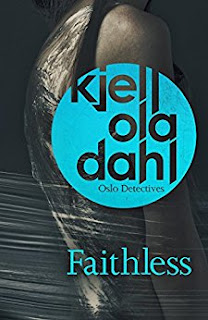 Faithless is the first of this author’s novels that I’ve read and I think it might be the first of his works to be translated into English. Either way, it’s part of a series but can easily be read as a standalone as indeed I did.

Inspector Frank Frolich of the Oslo police is involved in an operation targeting an organised crime boss. He pulls over a woman leaving the boss’ house and searches her only to find a small amount of cocaine. She’s charged and fined and that is apparently that. That evening he attends a party only to find the woman he arrested that morning in attendance. It’s an awkward situation to put it mildly. Fast forward a day or so and the woman is found dead, her body scalded, wrapped in plastic and dumped in a dumpster. For various personal reasons, Frolich wants as little to do with the case as possible, preferring to spend his time investigating the disappearance of an African woman in Sweden to attend an international summer school. His bosses insist however and so he must work across both cases.

Faithless is billed as a novel featuring Oslo detectives, as in the plural, and I gather that Frolich and a second detective, Gunnarstranda, are supposed to be the main characters. They certainly feature most, but a strength of this book is how the author brings to life their various colleagues. In this way, Faithless mirrors Ed McBain’s 87 Precinct series, or the novels of Joseph Wambaugh. In particular, we get to know Lena Stigersand, an intelligent cop who’s clearly destined to go far, Stale Sender, a crass bully-boy thug, and their boss Mustafa Rindal, who’s recently married a Muslim and converted to Islam. All of them have their parts to play in the narrative and all contribute to the investigation; this gives an air of realism to the novel that is often lacking from police procedurals, as all too often in the genre the trope of the rogue/maverick cop taking it upon themselves to solve a case is trotted out.

This is a well-crafted procedural with various twists and turns to keep the reader guessing. With well-developed characters, it’s a good, solid, slice of Nordic noir. 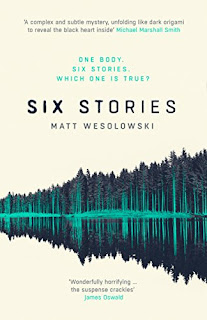 This is one of the best novels I’ve read this year, perhaps in memory. There, I’ve said it. Six Stories really is something special.

We all know of the podcast phenomenon. There’s Serial, obviously. More recently, there’s been Untold, the Peter Jukes telling of the still-unsolved Daniel Morgan murder. Six Stories takes as its format a fictional true crime podcast. Six Stories (where the book gets its title, obviously) is a fictional podcast that looks at a case from six different perspectives. If you’re thinking that this is a great idea for a podcast you’re not alone, reading the novel I thought the author had a good idea for a format should he ever want to step away from novel writing. Not that he should on the strength of this debut, mind.

So back to the novel. The narrator of the Six Stories blog is Scott King, a former journalist. The focus of the podcast is the 1997 death of a teenager, Tom Jeffries, on Scarclaw Fell, a remote fictional mountainside and woodland area in Northumberland. Tom disappeared, his partially decomposed body found a year later. Ruled at the time as an accidental death, the rumours that there was something else at play have never really gone away. Those caught up in the incident, particularly the adults, were subjected to tabloid abuse and trial by media. Scott King interviews the other teenagers, the adults who were supervising the trip (they were staying in a lodge, doing various outdoor activities) and the son of the aristocratic landowner who owns Scarclaw Fell, who along with some friends, discovered Tom Jefferies’ body.

The narrative is almost entirely told through the interviews conducted with the various participants for the Six Stories podcast, occasional sections told from the perspective of Henry Ramsey, the landowner’s son. The structure is an effective one and allows the author to keep the reader guessing while ratcheting up the tension. It’s a little like the device of the unreliable narrator, though here all the witnesses are unreliable in that we don’t know who to believe, what agendas they might have, what they may or may not have to hide. Added to the mystery of what happened to Tom Jeffries, is a potential supernatural element. Like many unclaimed wildernesses, Scarclaw Fell has been the focus of stories of monsters or ghouls throughout history and some of the teenagers’ report having seen something on the moorland. Was Tom Jeffries, who we quickly learn to have been a troubled youth who rubbed people up the wrong way, murdered by another’s hand? Was he the victim of whatever stalks Scarclaw Fell? Does this explain the mystery of why his body remained missing for a year?

This is a fantastic debut, incredibly assured. On the strength of Six Stories, Matt Wesolowski is someone who's work, like the beast of Scarclaw Fell, I will hungrily devour in the future. 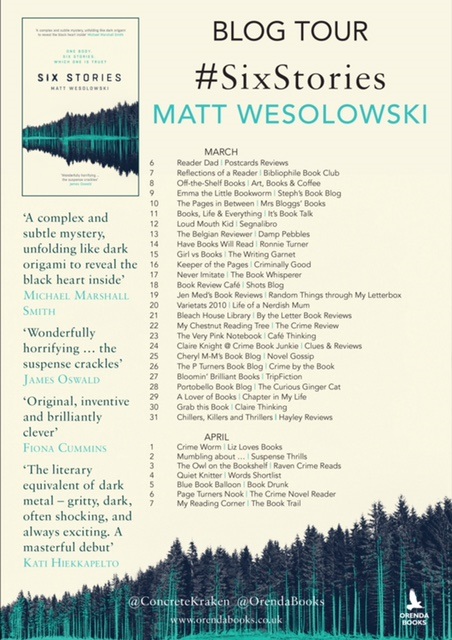 Posted by TheReader at 10:42 No comments: