In The Absence of Miracles by Michael J Malone 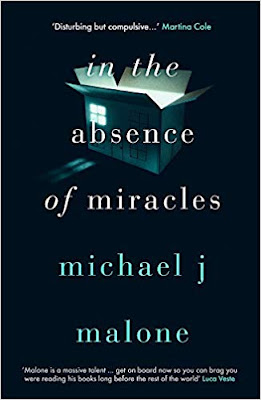 Michael is a prolific author and I’ve read a few of his titles down the years. He’s always guaranteed to produce a tightly plotted tale and in recent years he’s moved from more crimes titles to more psychological suspense tales, oftentimes with a touch of the supernatural about them. In The Absence of Miracles is very much in this territory.

When John Docherty’s mother is taken into nursing care having suffered a stroke, he has no choice but to sell her home. Of course, to do so he needs to clear it of its contents and it is in doing so that his world is turned upside down. For John finds in the attic a box, and in that box, he finds proof that he had a brother he knew nothing about, one who disappeared when he was young. This discovery forces John to reevaluate his life, everything he thought he knew, everything he thought he could remember. John starts to investigate and find answers but finds it difficult to get to the truth, for inadvertently he has uncovered a secret that threatens his emotional and mental well being.

I don’t really want to give away much more about the plot, but will say that this novel deals with issues of neglect, abuse, mental health, and much more. These are difficult subjects to write about but Malone does so with real sensitivity. The result is a beautifully written novel and one that is both touching, gripping and disturbing.

Both the plotting and characterisation in this novel are very adeptly done and In The Absence of Miracles is a poignant book that will stay with the reader long after the last page has been turned. 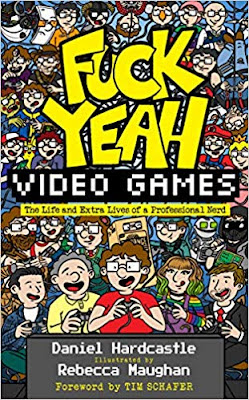 I have to admit to having a love/hate relationship to videogames and gaming. At points in my life I’ve been a gamer. My early teens in the late 1980’s/early 1990’s (yes, I really am that old) were spent playing Dungeon Master, a Dungeons & Dragons type of role-playing game, on a machine that I can’t even recall. But then I discovered girls, underage drinking and worse, and stopped playing. Years later, after graduating from university, I played out my god-complex with Sid Meier’s Civilisation, a game which had you guide a tribe of cavemen through the stages of civilizational development, all the while battling and conquering other tribes and cities, until they were the most advanced and powerful on earth. But I got bored of that and besides, responsibility in the form of work and family got in the way. In recent years I’ve dabbled with my crime fiction tendencies, fancying myself as an assassin and hitman, and playing games with those titles (Assassin’s Creed and Hitman). But again, I’ve eventually got bored and found they just take too much time. The point is that I’m not a videogames aficionado in the true sense of the word, I don’t share the author’s love and affection for them, these days preferring books or film. But I certainly can understand their appeal.

Fuck Yeah, Videogames is a peon to gaming and the games that Daniel Hardcastle has played, an ode to them, an extended love letter if you will. He’s clearly younger than me (there’s no Dungeon Master here, nor Sid Meier’s Civilisation) and those that do cross with my later period of gaming differ from my choices (no mention of Assassin’s Creed or Hitman) but that’s ok, you don’t have to agree with his choices, or even to have played the games at all. In fact, you don’t even have to be a gamer to enjoy this book, the author’s enthusiasm is infectious and with entertaining illustrations courtesy of Rebecca Maughan, this book is really brought to life.

I very much enjoyed Fuck Yeah, Videogames. It’s not my usual type of read or my preferred genre, but one can’t help but get caught up in his enthusiasm.

The Devil’s Aspect by Craig Russell 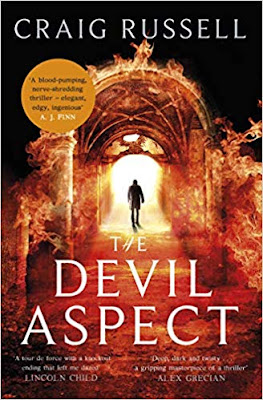 I’m not a massive fan of serial killer fiction, preferring my crime fiction to be noir and/or touching on issues of corruption. But occasionally a serial killer thriller comes along to break the mold, or at least bring something fresh to it.

The description of The Devil’s Aspect was intriguing. On the cusp of the Second World War, Dr Viktor Kosárek takes a new job at a remote castle in Czechoslovakia that has been converted into a high-security asylum. Its inmates are the Devil's Six, six of the worst mass killers in Central Europe. With names like The Woodcutter, The Clown, The Glass Collector, The Sciomancer and The Demon, there’s more than a little of The Silence of The Lambs to this novel. But that’s not all, Prague is being terrorised by yet another serial killer, dubbed Leather Apron, and this is a further thread that runs through the narrative.

Dr Kosárek is a Jungian and believes that myths and legends are archetypes common to all humanity. Thus, he has a theory that one’s evil, a person’s Devil’s Aspect, is to blame for all that is wrong in the world, and that the killers housed in the asylum did their wicked acts thanks to their Devil’s Aspect getting out of control. To prove his theory, he intends to use narcotics to put his patients into a suggestible state where he can identify and confront their Devil's Aspect. But what he finds is far more frightening than he suspected.

This is a long novel, running to approximately 500 pages, but the pages fly by. It touches on the madness of the Third Reich and Nazism that is about to engulf Europe, the paranormal – the devil and demons – and the hunt for the serial killer, Leather Apron. While Viktor Kosárek is the main character, there is a strong supporting cast. Most notably of all is the Prague police detective, Kapitan Lukáš Smolák, who is in pursuit of Leather Apron and seeks Kosárek’s help and advice, and Judita Blochová, an asylum administrator of Jewish extraction who Kosárek develops feelings for.

This is a great novel and one that I read very quickly. If I have one criticism, it’s that there are a couple of gruesome scenes where Leather Apron’s victims are found. I’m not a prude but I do find the gratuitous violence in serial killer thrillers a little off-putting. Luckily, however, there are less than a handful of these scenes and the author resists the temptation to tip into prurience, something that some other writers of serial killer thrillers do.

The Devil’s Aspect has already been snapped up by Hollywood for adaptation, which is no surprise. This is actually the first novel of Craig Russell’s that I’ve read and on the strength of this I might well dig out his earlier work. 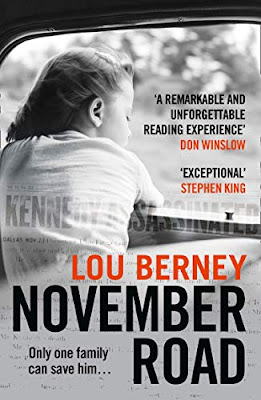 The assassination of John F Kennedy has created a mini-genre all of its own down the years. Movies such as The Parallax View, though heavily influenced by the tragedy, used it as the inspiration for a fictional assassination, while others fictionalised the assassination, elements of it, or the circumstances surrounding it. Amongst these are Charles McCarry’s novel Tears of Autumn, Don DeLillo’s Libra, and of course, perhaps the best of them all, James Elroy’s Underworld USA trilogy.

Of course, this is is just a taste of the JFK assassination’s treatment in film (I haven’t even mentioned Oliver Stone’s film, JFK), television, and literature and the canon includes works which focus entirely on the assassination, to those that use it more as a backdrop. Lou Berney’s November Road is very much of the latter. While the assassination of Kennedy is integral to the plot, it is not central to it in the same way that it is to some other works. This isn’t a JFK conspiracy thriller as such, more one that uses the assassination and the conspiracy that surrounded it (in the novel there was a conspiracy, Lee Harvey Oswald having been a patsy) to drive the narrative forward.

Frank Guidry is a fixer for the New Orleans mob, a go-to guy for fearsome mobster Carlos Marcello. Guidry was asked to drive a car to Dallas. After the assassination, he puts two and two together and realises that the car had been used as a getaway vehicle for the real assassin. Guidry is scared, the assassination being audacious even for the mafia, in fact, it borders on the recklessly dangerous. When others who know about the plot start to die, Guidry guesses that Marcello is tying off loose ends and goes on the run.

Guidry meets a woman and her daughter who have fled a life of suffocatingly cloistered domesticity. He charms her so that he can travel with them, reasoning that whoever Marcello has sent after him will be looking for a man travelling alone, not a man with a family. But as they travel across America, he starts to develop real feelings for them.

November Road is in actual fact a road trip novel. The Kennedy assassination, Marcello’s determination to sew up loose ends, the hitman he sets on his erstwhile employee’s trail, all drive the narrative forward and give momentum to Guidry’s journey. The characterisation in the novel is top-notch. The contract killer is chilling, the mother and daughter touching and vulnerable, though not in a saccharine clicéd way. But most of all this is Guidry’s story. Much is said in creative writing workshops about a character’s arc, and November Road is a study in how to craft such an arc well. Guidry goes from selfish womaniser to caring partner and father figure, though tragedy is signposted from the start and its obvious that things can’t end well. This is all done incredibly adeptly and this change in Guidry’s outlook, this transformation he experiences, is convincing.

November Road is a brilliant novel. Part JFK conspiracy thriller, but mainly a road trip undertaken by a desperate man, this is a definite five star read.

Posted by TheReader at 10:24 No comments: