Jihadi John: The Making of a Terrorist by Robert Verkaik 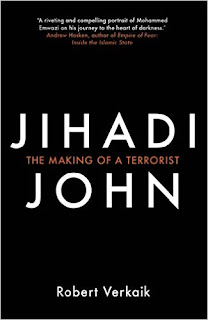 As someone who has always enjoyed reading biographies of controversial political and international figures I came to this work hoping that my assumptions would be wrong. Before the the invasion of Iraq I read a number of biographies of Saddam Hussein and while some titles were mature studies of how such a vicious dictator seized and kept hold of power for so long, others were no more than tabloid hatchet jobs. Mohammed Emwazi, aka Jihadi John is such a controversial figure (for obvious reasons) that I worried that this would be little more than salacious gossip, a raking over of every horrific little detail for the titillation of the reader.

I’m happy to say that these concerns all proved unfounded. Don’t get me wrong, Robert Verkaik has written no apologia for Jihadi John. What he has done is place Mohammed Emwazi, who he had met and corresponded with while working for the Independent, within the wider milieu of disenfranchised Muslim youth. The author met Emwazi while working on articles about young Muslim men who felt that they were being harassed by MI5 and the Met’s anti-terrorism branch. He charts how Emwazi travelled from dabbling in drugs and gangs to falling in with a group of young men who were interested, to a greater or lesser degree, in the conflict in Somalia. The Security Service had, and almost certainly still has, a policy of aggressively cultivating sources in the Muslim community. MI5 will mix inducements with threats and should the target resist, the pressure is amplified. With Emwazi this led to him losing not one, but two marriage proposals, and being barred from entering Kuwait where he wished to start a new life.

The author is very even handed in his analysis of these events. While he understands where the Security Service is coming from, he also gives fair weight to the opinions of Asim Qureshi of Cage, who famously received vitriol from the red tops for describing Emwazi as a ‘beautiful person.’ In the end, having weighed up all the competing arguments, he can’t help but conclude that the approach of the security services and police is heavy handed and crudely lacking in finesse.

Once again it is important to note what this is not, for it would be unfair on the author should people be put off reading this work for fear that it is a sympathetic account of a man who brutally butchered his captives. Robert Verkaik makes no excuses for Mohammed Emwazi and his book is not an attempt to shift the blame either from him or his masters in the so-called Islamic State. But what he has produced is a thoughtful and sober analysis of how a seemingly normal young man became such a brutal killer, and how the UK government and law enforcement can better prevent the next Jihadi John from joining the terrorists’ ranks. 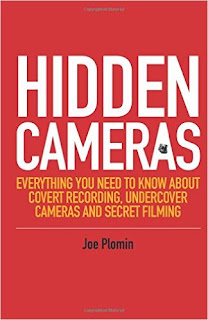 This is a book that might not be of interest to many people outside of the television/media industries. As a former current affairs journalist who was employed on a number of Channel 4 Dispatches productions, my interest was obvious. But many people might shy away from such a niche title. This is a pity because as the author demonstrates secret filming is becoming increasingly ubiquitous. From nanny cams, through people filming confrontations with the police on their smart phones, to concerned relatives secreting cameras in the nursing homes of their elderly residents; there are innumerable examples of people taking the initiative themselves. Equally there are countless reasons why someone might take the step to secretly film: some might be actively trying to capture and expose perceived or suspected wrongdoings, once the sole preserve of the professional journalist; others might simply be paranoid or think it better to be safer than sorry; still others might seek to incite wrongdoing in the hope of causing embarrassment or gaining financial reward. And with the increasing availability of digital cameras and their falling cost, there are more options than ever regardless of motive or target.

Joe Plomin, himself a veteran of many a BBC Panorama, has written a definitive manual on Hidden Cameras and how to go about secret filming. But he doesn’t shy away from the ethics of such a path and nor does he advocate a laissez faire approach. Rather he advises caution and asks the reader to consider whether this is really what they need to do. If having weighed up all the legal and ethical considerations the reader decides that the issue they wish to investigate is serious enough to warrant such a level of intrusion, and that there really is no other way of going about it, then the author has packed in sound advice on how to conduct such an investigation. From choosing a camera to the actual process of surreptitiously filming, Joe Plomin offers sound and mature advice. He covers how to conduct oneself when filming, offers advice on what to do if challenged or if one comes under suspicion, and even how to film secretly with a phone or tablet.

This is an important work for the professional reporter, the citizen journalist, the political activist, the concerned family member or relative. What it is not is a reckless call to arms for digital camera wielding vigilantes or those looking to make a quick buck. This is a sober work that stresses the need for responsibility, highlights the legal and ethical pitfalls, warns of the damage that can be done when such a powerful tool is wielded inappropriately. That said, when the goals are just, this is a book that could make the difference between success and failure, between the exposure of wrongdoing or it being swept under the carpet.

For that reason I award this 5 stars.
Posted by TheReader at 11:45 No comments:

The Butcher's Trail by Julian Borger 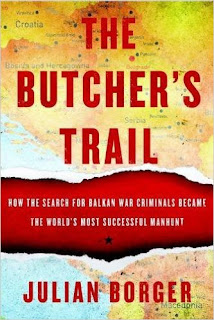 This is the true story of what the author describes as the world’s most successful manhunt. It's a story about how a small group of determined individuals – investigators, prosecutors, spies and special forces – hunted down some of the perpetrators of the most horrific human rights abuses to occur in Europe since the Nazi era. It will also come as a surprise to many, as indeed it did to me, who can recall the seeming impotence of the US and EU in the face of the genocide rampaging across the former Yugoslavia during the 1990’s. The hunt that followed afterward appeared to go the same way, I can remember many a headline about the failure of the NATO alliance to bring war criminals to justice, who in turn appeared to take immense pleasure in rubbing the noses of The Hague Tribunal in their apparent imperviousness.

But the author, Julian Borger, a renowned Guardian journalist, marshals his facts and arguments well. He makes a solid case for the hunt for Balkan war criminals, rather than being an ignominious failure, in fact being an outstanding success. I would go so far as to suggest that his book in effect demonstrates that the hunt was the premier foreign policy success of the late 20th century, and overshadows those dubious policy decisions the NATO powers have made this century as well.

Every name on The Hague’s list was accounted for, a significant proportion facing trial after either handing themselves in or being captured. There were many mishaps along the way, much dragging of feet and reluctance borne from everything from disinterest to the fear of complicity being revealed in court. But there were also brave souls willing to put their reputations, careers, and in some case lives, on the line to see justice done. And there was derring-do too; the German commandos who against all the odds, and with little support, cobbled together the first successful snatch operation; or the American Delta forces who prepared an ambush which included a man in a full-body gorilla suit.

But for all the smoke and daggers, and there was much of that, the real heroes were the prosecutors such as Carla Del Ponte, who harangued every international body and nation conceivable to bend them to their will, and the investigators of the The Hague Tribunal itself, who understaffed, underfunded and overstretched, achieved more than all the better funded nation state intelligence agencies combined.

So the question remains: why if this hunt proved so successful has it all but been forgotten? In some ways it hasn't, the American’s certainly learnt much and were later to use this knowledge in Iraq and Afghanistan; indeed, Pete Blaber, the Delta commander, even took the Gorilla suit with him. But to public and political consciousness, the hunt for Balkan war criminals has all but faded from memory. Much of this can undoubtedly be put down to events which were to come: 9/11, the War on Terror, the disastrous intervention in Iraq were inevitably to dominate attention. But the author points to a more tragic explanation for bearing at least part of the blame. For whereas the hunt itself was a success, justice can be seen to have been partial at least. While some long sentences were handed down to the worst offenders, the prison in Scheveningen was luxurious with yoga sessions, classes on pottery and sculpture, and personal trainers. The Hague Tribunal’s list of suspects was always partial, a snapshot if you will, and many a perpetrator escaped Scot-free to live amongst the shattered communities of the Balkans, a constant and painful reminder of the past. But worst of all were the acquittals, especially those on appeal, and Borger points to interference from the US who feared a precedent being set for those in their own chain of command. For if a Bosnian Serb can be convicted for massacres committed by the bloodthirsty militia under his command, what of US generals in Afghanistan/Iraq?

So in conclusion this is a powerful but bittersweet account, a tale of a small group of dedicated individuals who bullied, cajoled, and forced the world to make do on its promises to bring justice to the victims of Balkan genocide, only to see this betrayed in courts of appeal and the corridors of power.

I would give this 5 out of 5 stars

Posted by TheReader at 09:34 No comments: