The Outlaw Ocean by Ian Urbina 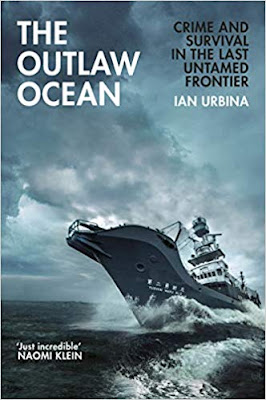 This is a book that I kind of happened upon by accident. Or rather, I misunderstood its content. When I got hold of this title, I thought it was going to be an investigation into organised crime’s use of the sea: drug trafficking, people smuggling, piracy. These topics are touched upon, but the bulk of this book is the author’s investigations into the trawler industry.

The oceans cover approximately seventy-one percent of the world’s surface. And this sphere is governed by a patchwork of ill-enforced law. Ships are supposedly governed by the laws of the nations whose flag they sail under; beyond that, there’s maritime law that governs the oceans but it’s patchy at best. All this means that when something happens at sea, jurisdiction is often messy. Then there’s the problem of enforcement. It’s not like someone can just dial the emergency services and summon the police. Then there’s the problem of investigation. The ocean by its very nature does not make a good crime scene. Apart from its lack of solidity, evidence can simply wash away. Similarly, boats move and have to be tracked down.

Despite the fact that this title only touched on the issues I was expecting, I quickly found myself engrossed, for the author reveals stories of shocking cruelty and criminality. I knew something of illegal fishing - trawlers breaking quotas and illegally fishing in the seas of other nations - but I didn’t quite know its scale. Nor was I aware of the brutality meted out as commonplace to crews. It transpires that many of the world's trawlers are crewed by slave labour. Seafarers are recruited from the poorest slums in the poorest nations on earth, their identity cards are taken so that they can’t leave, they are made to sign contracts that they cannot read, which pledge them to multiple charges, thus ensuring their debt bondage. They suffer beatings, sexual assaults, and rapes, and sometimes worse - murders and executions are regular occurrences.

The author spent five years investigating all this, teaming up with environmentalists and activists, and the under-resourced law enforcers who struggle to uphold what laws there are and bring at least some of the perpetrators to justice. There have been all too few successes.

This is a deeply troubling book, not least for those like myself who’ve chosen to cut down on meat (for health and environmental reasons) and to eat more fish. I knew that there were concerns about plastic and chemical pollution in the seas and in farmed fish, but now anyone eating fish has to ask whether they are propping up a corrupt industry that operates on the backs of the enslaved. And there are the roaches. This is a minor issue, certainly, when considering the brutality the crews endure, but it is worth noting. One thing the author reveals is that the trawlers are crawling with cockroaches. So the fish are not exactly kept in the most sanitary of conditions.

To put all this in context, if this was happening on land - on a farm, a slaughterhouse, a factory - there would be an outcry. We’re used to seeing environmentalists and animal rights activists exposing the conditions within the meat industry, yet what the author details here is much, much worse. Imagine if a meatpacking facility was found to be cockroach-ridden, employing slaves who were beaten, raped, even murdered, who flouted the law with impotence and arrogance. They would be shut down within days, those responsible prosecuted. Yet this is precisely what happens every day and night on our oceans.

It is not every day that one comes across a book that shocks and changes one’s perception of the world. This is such a book. Deeply moving and concerning, this is a powerful and important exposé.